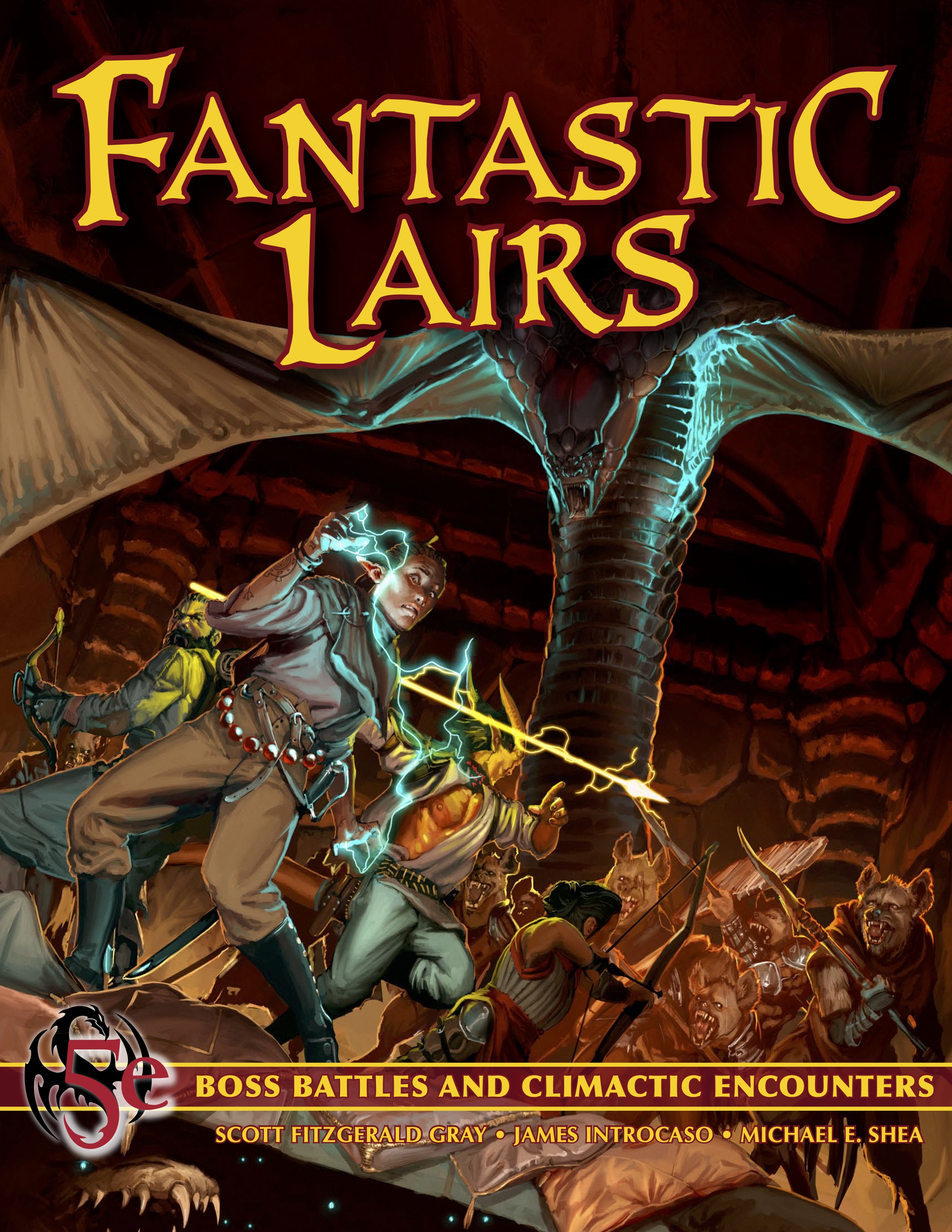 A 147 page book of twenty three boss battles and climactic encounters for your 5th edition fantasy roleplaying game available electronically through Paypal or in print through DriveThruRPG! Check out the free sample including two free lairs you can use tonight!

The best 5e fantasy roleplaying games are often the most unpredictable. When the plans of the Gamemaster meet the actions of the characters, the incredible creative energy that results can spin encounters off in different directions, creating a largely spontaneous campaign story that keeps the GM and the players alike on the edge of their seats. But when it comes to the climactic boss battle encounters that cap off single adventures or entire campaigns, it's often much harder for GMs to work things out on the fly.

That's where this book comes in.

Scott Gray, James Introcaso, and Mike Shea have teamed up to lighten the load of shaping and developing your game's climactic encounters. Fantastic Lairs is a 147 page book including twenty three capstone lair encounters from 1st to 20th level for your 5e fantasy RPG, designed to inspire and fit into your own campaign. Each fantastic lair includes evocative artwork, a beautiful full-color map, and a well-designed and playtested boss encounter for characters of various levels.

The ebook version of Fantastic Lairs includes the PDF and ePub of the book along with a map pack suitable for virtual tabletops and a monster appendix with stat blocks for every boss and monster in the book.

Check out the free sample, which includes two fantastic lairs you can use right now!

Fantastic Lairs is the joint brainchild of all three members of the design team, each of whom brings a wealth of creative skill and experience to the project. From over fifty initial concepts, the team narrowed down a selection of twenty ultimate boss lairs for development in this book. 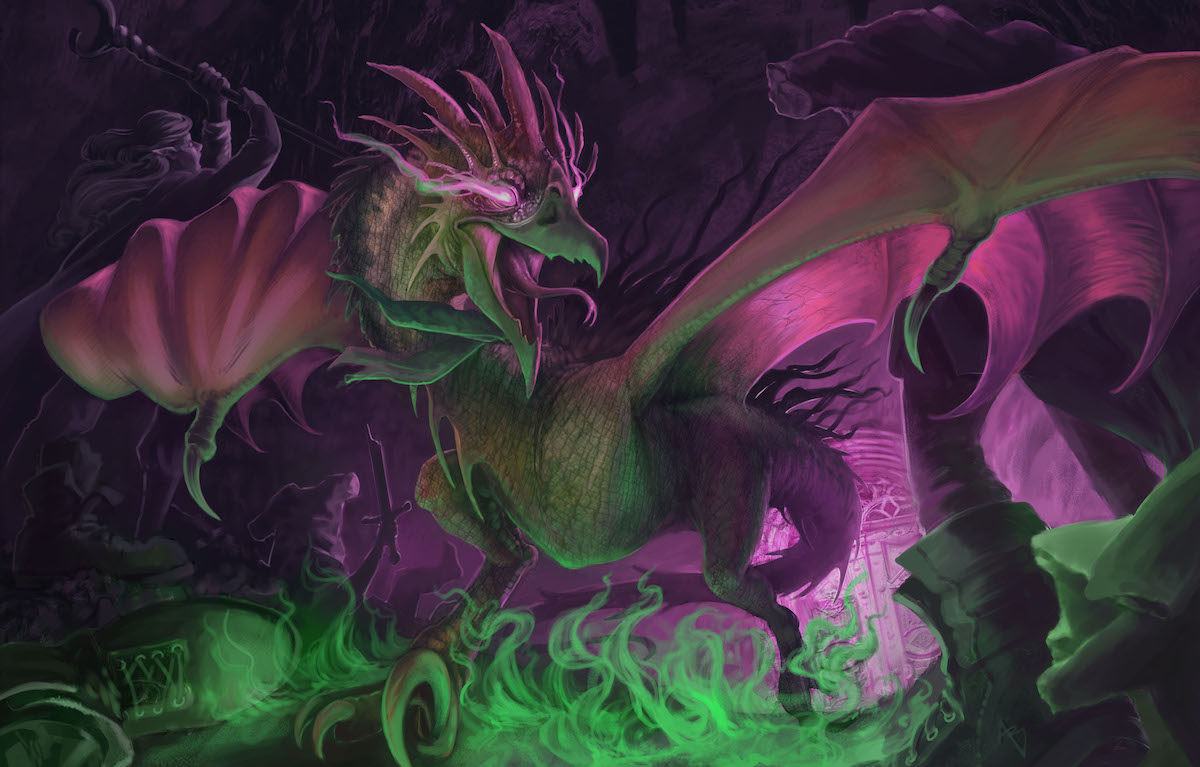 Caves of the Cockatrice (1st level). A shadow-infused cockatrice keeps a stone garden in a lair built around an ancient and corrupted fey gateway.

Temple of the Centipede Cult (2nd level). A band of centipede-worshipping cultists feed living sacrifices to their pets in a fallen temple of Asmodeus.

Lair of Lord Wiskers (3rd level). A band of wererats led by the megalomaniacal Lord Whiskers gathers up all the city's silver to be destroyed in their trap-infested sewer lair.

Last Call at Nevermind (3rd level). The Dead Roses, a band of cutthroats led by the murderous bandit captain Adilia Rose, hide out between jobs in a seedy tavern built from a titan's skull.

Nature's Rage (4th level). A blood-drenched druid and a horde of beasts plot revenge against the despoilers of nature in the ruined zoo of a murdered noble.

Ashsnarl's Secrets (5th level). The half-dragon Tharandra Everflame and her kobold minions steer a machine of war and fire through defenseless villages.

Sticky Toffee (5th level). The confections at Auntie Bea's Sweet Treats are more than they seem — as is the shop's night hag proprietor.

Bumpy Ride (6th level). A mage uses his airship and an array of deadly incendiary devices to terrorize other wizards into subservience, and the characters must put an end to it.

The Lamia Job (6th level). The characters must infiltrate a mysterious bank vault to reveal the murderous plots and corrupting illusions of a lamia mastermind.

Ithrix Blackbile (7th level). A young black dragon uses his acidic breath to keep a band of trolls under his sway in an ancient cyclopean ruin.

Those Who Are About to Die (7th level). The characters face waves of brutal combatants and devastating hazards in this arena of blood, death, and fire.

Zengran's Game (7th level). From a lair in an extradimensional emporium of games, puzzles, and other wondrous entertainments, a rakshasa seeks out a group of adventurers destined for greatness.

Curse of Black Ice (8th level). Hunting in the icy wastes for decades, the frost giant werewolf’s hunting ground has expanded into more civilized lands. Now the adventurers hunt the monstrous frost giant to his lair of frozen ice and face his new bloodthirsty followers.

The Blood Palace (8th level). In a lost ziggurat of blood, a sinister spirit naga and its enthralled gnolls need the adventurers' help — to feed their hidden hydra.

Korrington Academy (9th level). An oni poses as the kindly headmaster of an academy for young sorcerers, where he uses a dark ritual to sacrifice faculty members and increase his power.

The Remembered God (10th level). Calathorr, a mighty aboleth who was once worshipped as a god, rebuilds their humanoid cult thanks to clever planning and a stroke of luck. If all goes well, Calathorr will enslave an army of followers even grander than their previous band.

Dragon Mummy's Rage (12th level). In the desert tomb of an ancient dragon queen, a dragonborn mummy lord guards a magical jewel that might destroy the world.

The World Eater (14th level). In an astral sanctum that defies natural physics, the characters battle an ancient lich responsible for the deaths of nine worlds.

Valentyne's Legacy (14th level). A cloud giant vampire moves across the sky in a red cloud castle defended by monstrous thralls and vampire spawn, drawing blood from the land and rising zombies in its wake.

Blade Queen's Throne (17th level). The characters must retrieve a secret word required to save the world — but that word is protected by a powerful marilith for its demon lord master.

Hells' Heart (20th level). In a shattered celestial temple, an ancient gold dragon is possessed by a demon prince encased in a spike buried in the dragon's chest, and threatens the mystical pillar that holds the multiverse together.

Put the Monster Back (20th level). The tarrasque breaks free of a secure facility designed to hold the worst monsters of creation, and will tear through the walls of reality, devouring entire worlds unless the characters stop it. 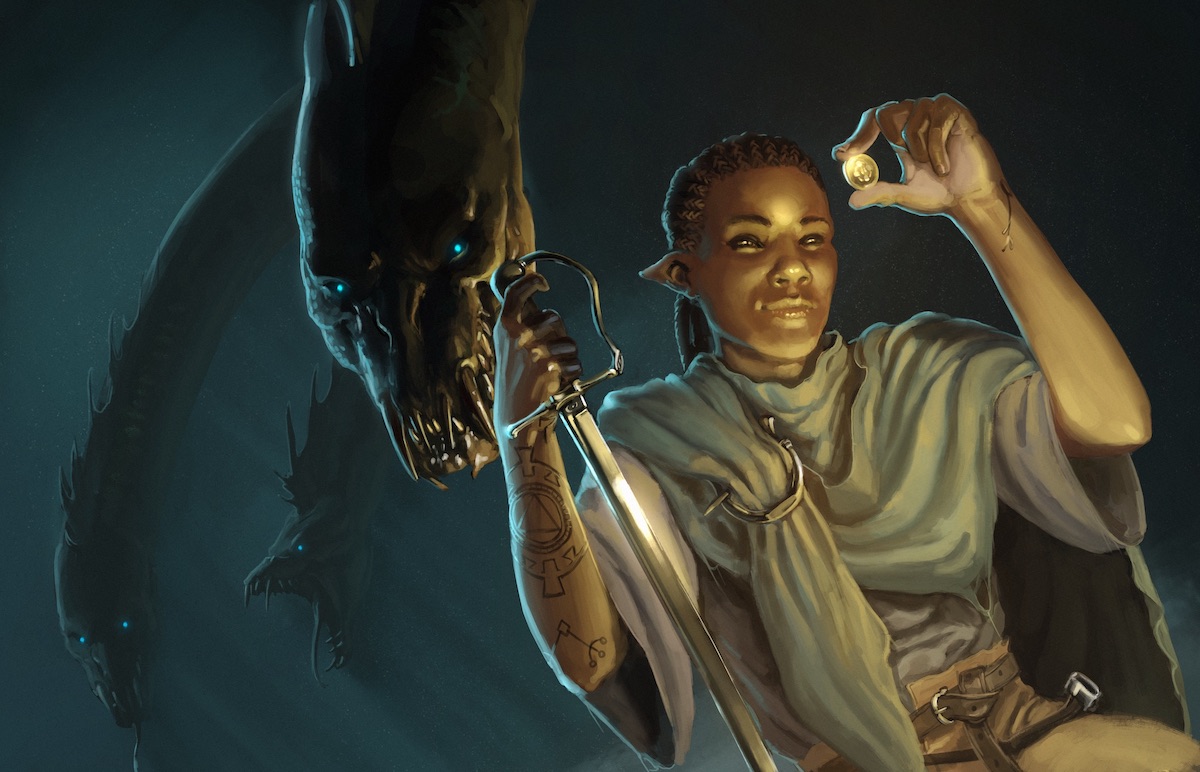 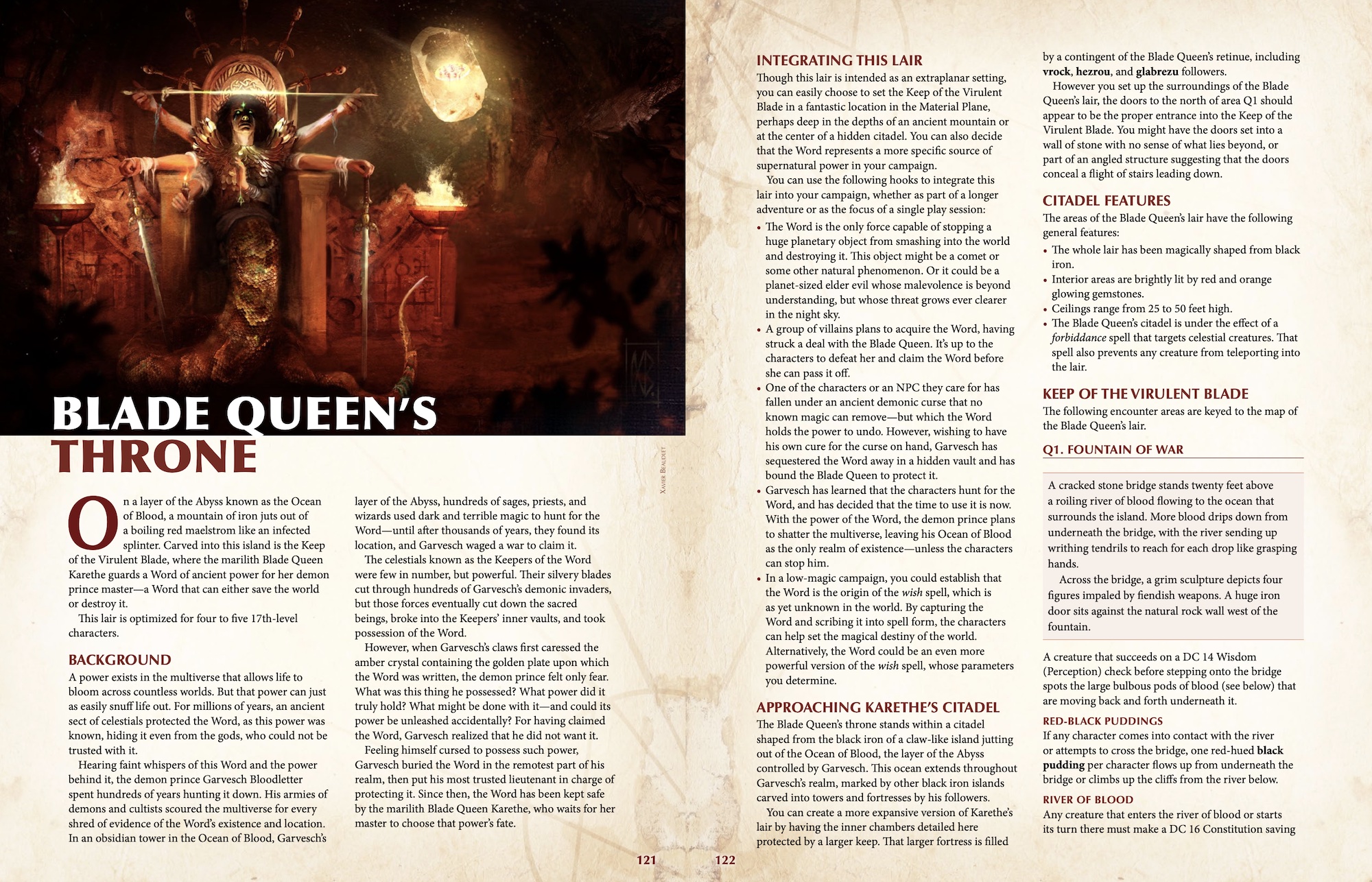 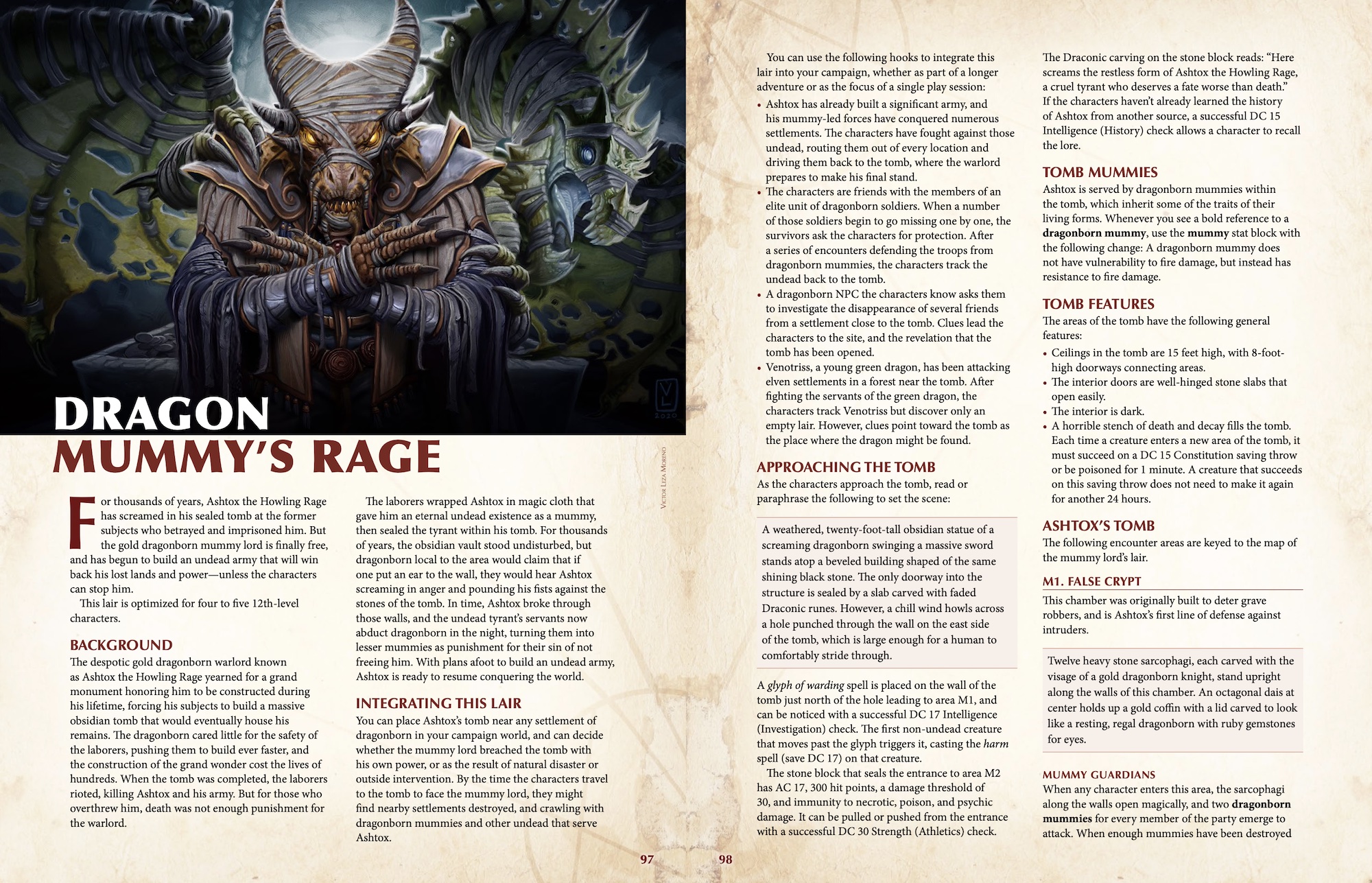 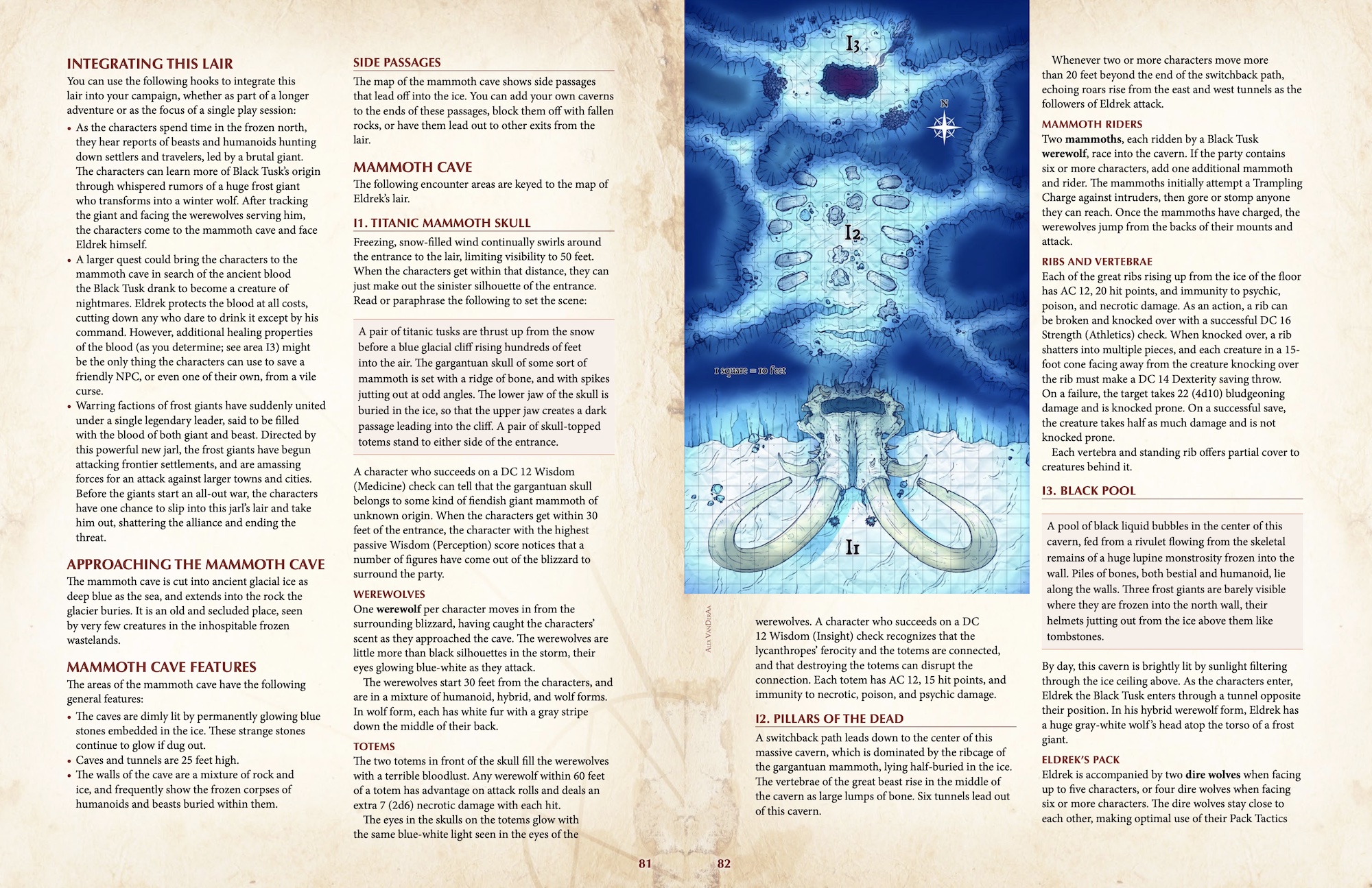